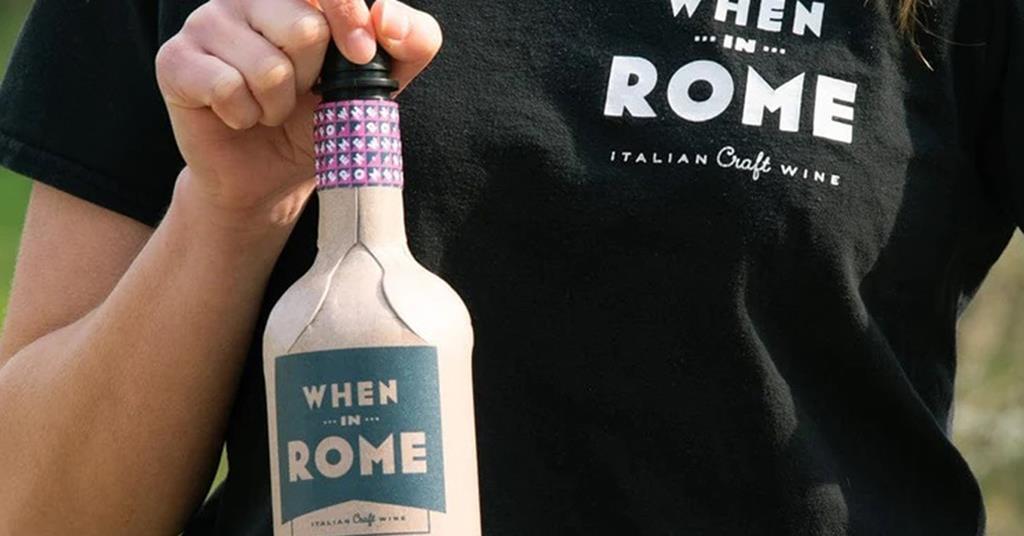 Wine in paper bottles: what does the future hold for us? | Article

Rob Malin was inspired to found the Anglo-Italian craft wine company When In Rome while living in rural Italy, watching locals buy wine from local producers in reusable containers. Now he and his co-founders, Andrea Marchesi and Lorenzo Canali, sell their own products in paper bottles. We spoke to Rob about this decision and his thoughts on the wine industry in Europe and beyond.

There is a lot of talk in the packaging industry about different materials; some say wine is supposed to be a luxury, so glass is a more appropriate material to use. How do you ensure that a consumer’s experience of a cardboard or paper bottle is the same as that of a glass bottle?

Good question. You’re right, wine is particularly over-packaged and people feel it has to be in a glass bottle to be of good quality.

We fully recognize that there are some things you can’t do without using glass. For example, you can put sparkling wine in a can, but that’s not a good size. If you want a 750ml serving of wine in a container, it has to be glass. If you want your wine to be clearly visible, you could use clear PET, but usually it’s glass.

We try to combat this by making our containers look as good as possible. Our paper bottle looks like a bottle, so we directly appeal to the consumer’s perception that this is what wine should come in. It’s made of stiff cardboard, so it’s nice to hold – a different feel to glass, but it’s still a premium product. It sells for £11 on Ocado, which is a good price for a bottle of wine.

In terms of the actual bottle, what is it made of? Just cardboard, or is there plastic, maybe a PET liner inside?

Yes, it contains PET, so it is fully recyclable – the bottle is certified according to the German packaging law, and it is the strictest recycling law in Europe. I know that single-use plastic is an issue in the consumer’s mind, and that’s why when we tried to sell a PET bottle, we encountered a lot of resistance from consumers. But of course in places like Germany and Scandinavia where they have a lot of boxed wine, a very high percentage of their plastic is recyclable. In the UK it’s much lower, so that’s a problem.

The bottle is made from 94% recycled cardboard and there is a metallic PET liner inside. It is 4% metallization, which is well below what it needs to be – the threshold for it to be safely recycled with other plastics – but it does provide extra protection for product quality . Then the cap is metal.

Is it recyclable in the paper stream or does it have to be separated?

You will see that there is a button on the package; you push on it, and the two halves of the paper bottle separate. Then you separate the inner plastic liner from the rest of the product.

Does the consumer have to do this or does it happen at the recycling facility?

Ideally, the consumer does, as it will increase their likelihood of being recycled. It’s a bit like putting a sandwich wrapper in the recycling box with the plastic window. Chances are it will still be recycled and the plastic will be separated into the waste stream, but it could also be discarded.

So, given the low plastic recycling rates here in the UK, how does your product compare to other materials? Have you carried out life cycle analyses?

Yes, we have done a lot of work on the life cycle. We’ve worked with Carbon Cloud, and they provide a full carbon footprint lifecycle analysis for our product.

Glass is fully recyclable, as you know. But it is recyclable at 1600°C, which is the melting point of glass. The melting point of aluminum is 660°C, so wine cans have a lower carbon footprint. Recycling glass represents a huge energy cost. If you had a hydrogen-powered glass furnace that would be nice, but there isn’t.

The other problem with glass is that it is very heavy. This bottle is extremely lightweight and easier to carry. If you think bag-in-box, it’s square. The same goes for pallets, so you don’t lose space when transporting them. Ordinary wine bottles are not an efficient form, and it wastes space.

I’m interested in what you said about the shape of the bottle. Is it because you want to provide the same luxurious bottle experience when the wine is in a box?

There is obviously a compromise to be made. Will our company succeed in selling only bag-in-box? No, it won’t, as it’s a small niche in the UK market. The bag-in-box represents between 3 and 5% of the British market. In France, it is 42%; in Sweden, 65%. This is how far behind we are, as UK supermarkets are dragging their feet. They are attached to things like recyclability and don’t think about the carbon footprint. We realized, as a business in the UK where nobody buys bag-in-boxes, that we’re never going to see the kind of scale that’s going to help the planet. However, I absolutely hope someone buys this bottle of Rosato, likes it, and trades it in for a boxed bag. I hope that will come when they get used to this product.

I think we have a good idea that the less action consumers have to take to recycle something, the more likely they are to do so. If someone is going for a bottle with sustainability as a feature, they probably already have recyclability in mind, so they might be more willing to take that step of separating the halves. But are you worried that this is one step too many? If they don’t separate it, what if it ends up in the recycling stream?

It depends on the local authority in charge. If you throw this bottle in a trash can in Germany, it will probably be recycled. In the UK it really depends on how sophisticated the local recycling authority is. Generally, the answer is not very sophisticated. So it worries me that people throw them away without separating the halves. This is a more expensive solution, however, so we are looking for a consumer who is actually willing to pay a small premium for an environmentally friendly product.

Have you thought about experimenting or going the route of an unlined bottle? Is this something you would be interested in looking into in the future?

100%. I’m not claiming for a second that the solutions we’ve found are perfect; they really aren’t. Both the bag-in-box and the bottle need to be separated for recycling, and both require some effort from the consumer. Similarly, one of the reasons why less than half of the glass in the UK is recycled is that the consumer does not care to put it in the right bin. But you just have to have good faith in humanity to do the right thing.

For a company like ours that wants to be at the forefront of sustainability in the wine industry, we will be looking at each of these new packaging solutions as they arise, and if there is a solution better than this, we will absolutely examine it. When you start measuring your carbon footprint like we do with Carbon Cloud, you can’t allow it to grow again. It has to keep falling, otherwise why are we doing it?

Do you ship bottles to your customers? Are they able to order online?

We are – we have our own website and sell on Amazon, but our main UK sales channels are Waitrose and Ocado.

What are your hopes for the future?

Obviously in the UK our aim is to start working with other grocery stores to distribute our products. We are also talking with overseas companies and hope to sell overseas, especially in North America and Asia.

The original interview has been edited for clarity.