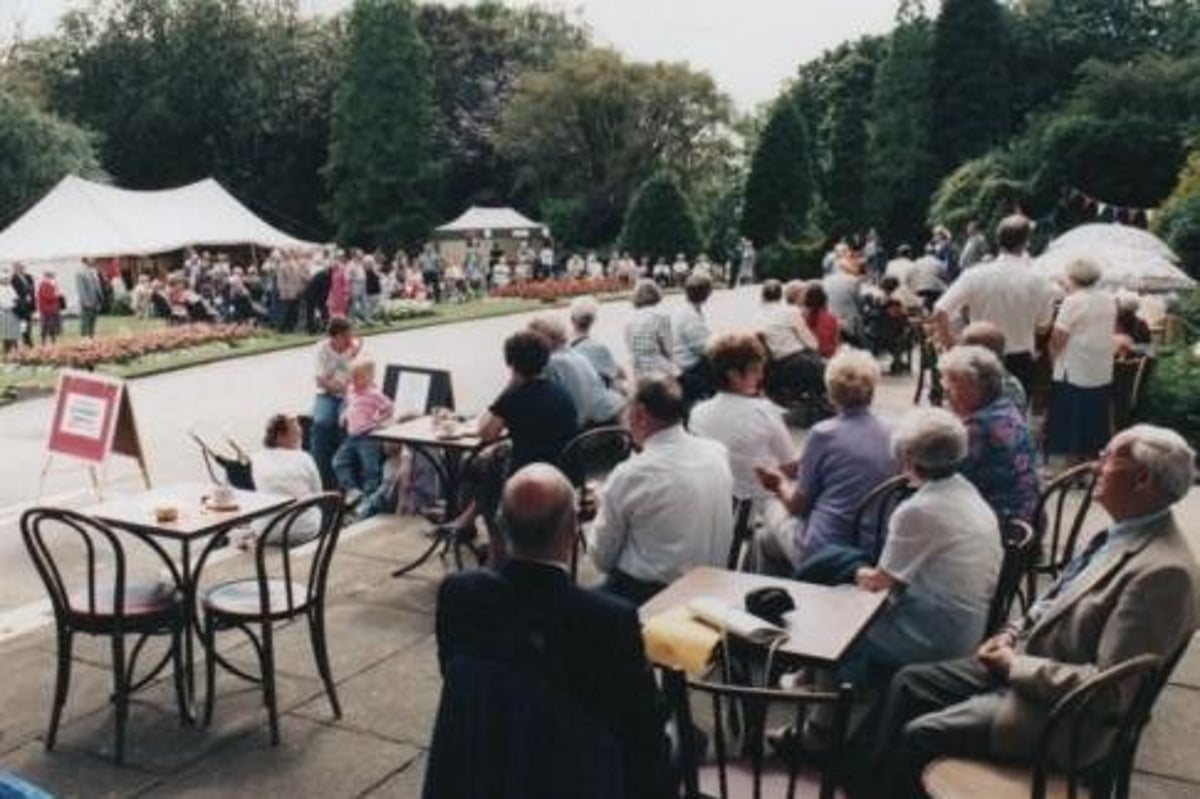 One of the biggest was that in Crow Nest Park 25 years ago to celebrate the golden wedding anniversary of the Queen and the Duke of Edinburgh.

The party was to look like a Buckingham Palace Garden Party like the Queen hosts every year.

The guests of honor were fifty local couples who had married in 1947, the same year as the royal couple.

The party had been organized by the Dewsbury Reporter and Kirklees Cultural Services, and was held under a marquee lined with rouched white and gold silk.

It all started with a sherry reception, courtesy of the Dewsbury Irish National Club, which was itself celebrating a special anniversary that year – its centenary.

The guests, with a total of 2,500 years of marriage between them, then enjoyed a delicious tea prepared by Mary Tidwell, of the West Riding pub.

This was followed by a dance on the lawn to 1940s music from the Embassy Band, conducted by Rodney Angell-Baker.

Guests were delighted to learn that Rodney was a Grenadier Guardsman on duty at Buckingham Palace on the royal couple’s wedding day.

Boutonnieres of gold roses for the ladies were provided by Lavender Hill Florists, and birthday gifts of luxury napkins with gold designs were presented by Mrs. Mavis Secker on behalf of the Dewsbury Market Traders Association.

A golden wedding cake was donated by the Safeway supermarket, baked by Mr Bryan Dickinson and iced by one of its employees, Gwen Ward, from Earlsheaton,

There was even a honeymoon for one lucky couple, Mr and Mrs G. Smith, from Mirfield, who won a two-day break at the Majestic Hotel in Harrogate.

Members of the King’s Own Yorkshire Yeomanry (light infantry), both Territorial Army and serving soldiers, put on displays within the grounds of the park.

Her Majesty, who had been informed of the event, sent the following response, signed by Her Lady-in-Waiting, Mrs. Jennifer Coulson, which was read at the reception.

It read: ‘I have been asked to thank you for your letter which has been laid before the Queen.

“Her Majesty was very interested to hear about your special Garden Party and to hear about the Golden Wedding Cake, the displays and the King’s Own Yorkshire Light Infantry who will be attending.

“The Queen and the Duke of Edinburgh have asked me to pass on to everyone at The Reporter, the Mayor of Kirklees and everyone present, their best wishes for a very happy and successful day.”

One of the main attractions of the day was a special gold birthday card made by Carlton Cards (now UK Greetings), which was designed by Judith Bland, a former pupil of Thornhill High School.

She had had a month to come up with the design and had made the card by hand.

The beautiful dried flower and lace card had a traditional design with the following message in gold lettering:

God blesses you most graciously and has kept you in his custody.

He gave you something beautiful – 50 golden years to share.

Miss Sally Ibberson, sales promotion manager at Carlton Cards, had suggested the idea for the handmade card and helped choose the materials.

On the day of the garden party, all 50 couples signed it.

The birthday card was then sent to the Queen and the Duke.

A second letter was also read from the then Speaker of the House of Commons, the Right Honorable Betty Boothroyd.

She wrote: “To all those couples who will be at the party in Crow Nest Park, I send my best wishes.

“I hope you all have a great day, and I send you my most sincere congratulations on your golden wedding anniversary and my best wishes for the future.”

Crow Nest Park was packed that day with relatives and friends of the golden wedding couples, all wanting to be part of the momentous day.

Many veterans and veterans were also present, who came to see the demonstrations given by the KOYLI regiment.

As we enter another special birthday for our Queen – her platinum birthday – let’s remember that momentous event we gave for her golden birthday.

So let’s look back on this momentous occasion knowing that it had the Queen’s seal of approval.